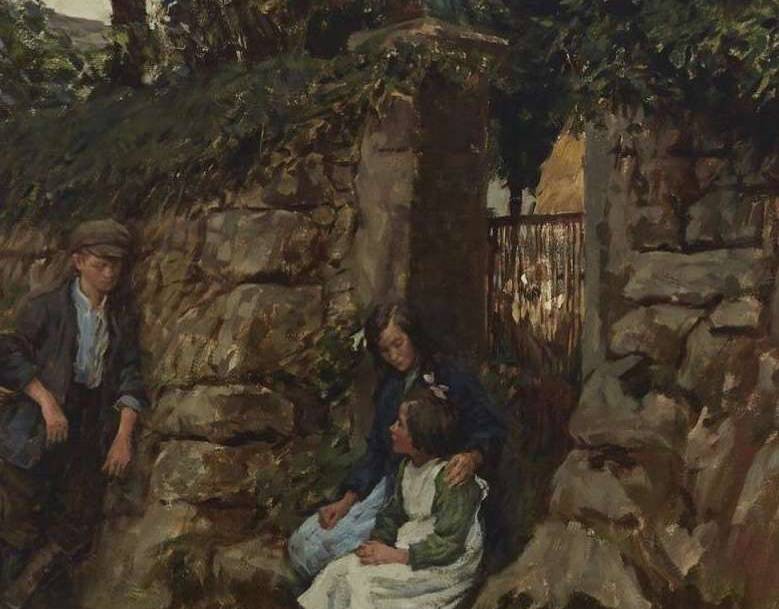 The Newlyn School was an art colony based in and near Newlyn - a fishing village on the south coast of Cornwall - from the 1880s until the early twentieth century.  It was where artists gathered to paint en plein air.

Some of the first British artists to settle in the area had already traveled in Brittany but were attracted by Newlyn’s wonderful light, cheap living and the availability of inexpensive models.  The artists painted the fishermens’ life at sea and the everyday life in the harbour and nearby villages.

Walter Langley (1852- 1922) was one of the first to settle and is subsequently recognised as the pioneer of the Newlyn Art colony. Langley was politically left-wing which led to his social realist depictions of working-class people, particularly fishermen and their families.

Stanhope Forbes (1857-1947) was a British artist born in Dublin who moved to Newlyn in Cornwall in 1884 and quickly became a prominent figure in the expanding colony of artists. As a founding member, alongside Walter Langley, he was often referred to as 'the father of the Newlyn school'.

Harold Knight  (1874 –1961) was born in Nottingham, where he studied at the Nottingham School of Art. It was there that he met his future wife, Laura Johnson, whom he married in 1903. After spending some time in Paris and Yorkshire, the Knights moved to Newlyn in 1907. The couple remained in Cornwall until 1918. Harold knight is considered to be one of the minor members of the school whereas his wife, Laura Knight, is a far more prominent artist.

In the late nineteenth and early twentieth centuries Lamorna, a fishing village along the coast from Newlyn became popular with artists of the Newlyn School and is particularly associated with the artist S J ‘Lamorna’ Birch who lived there from 1908.

The present day Newlyn Art School was formed in 2011, with Arts funding, and provides art courses taught by many of the best known artists working in Cornwall today.