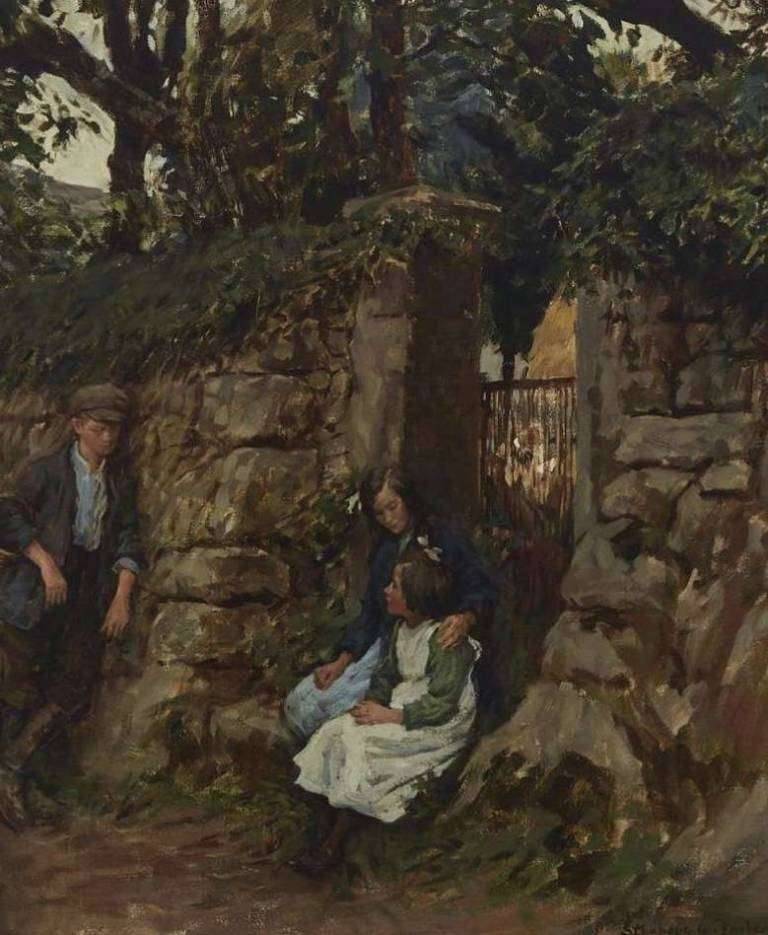 Almost certainly painted three miles west of Penzance on the steps of Sancreed Church, this gentle Stanhope Forbes oil on canvas depicts three inquisitive young children talking at the entrance to the churchyard where Forbes, the ‘Father’ of the Newlyn School would eventually be buried.

Although as recognisable in style as his more famous A Fish Sale On A Cornish Beach or The Health Of The Bride, this more Impressionistic example of Forbes’ en plein air style highlights his ability to depict local subjects with a refreshing lack of condescension. An older girl rests a protective arm on the shoulders of her younger friend while their male counterpart listens in as he leans against the warm Cornish stone of the church’s perimeter wall.

Tutored by Frederic Leighton and John Millais, Forbes was an early exhibitor and student at the Royal Academy. He then honed his craft at the private atelier of Leon Bonnat in Paris before moving to Newlyn in 1884. In 1899 Forbes and his wife founded their School of Painting.

Of this place, Forbes said:

“I had come from France and, wandering down into Cornwall, came one spring morning along that dusty road by which Newlyn is approached from Penzance. Little did I think that the cluster of grey-roofed houses which I saw before me against the hillside would be my home for many years. What lode-some of artistic metal the place contains I know not; but its effects were strongly felt in the studios of Paris and Antwerp particularly, by a number of young English painters studying there, who just about then, by some common impulse, seemed drawn towards this corner of their native land... There are plenty of names amongst them which are still, and I hope will long by, associated with Newlyn, and the beauty of this fair district, which charmed us from the first, has not lost its power, and holds us still.”

His works are in the collections of the Tate Gallery, The Victoria and Albert Museum, the Imperial War Museum, Penlee House, Windsor Castle and the Royal Academy.