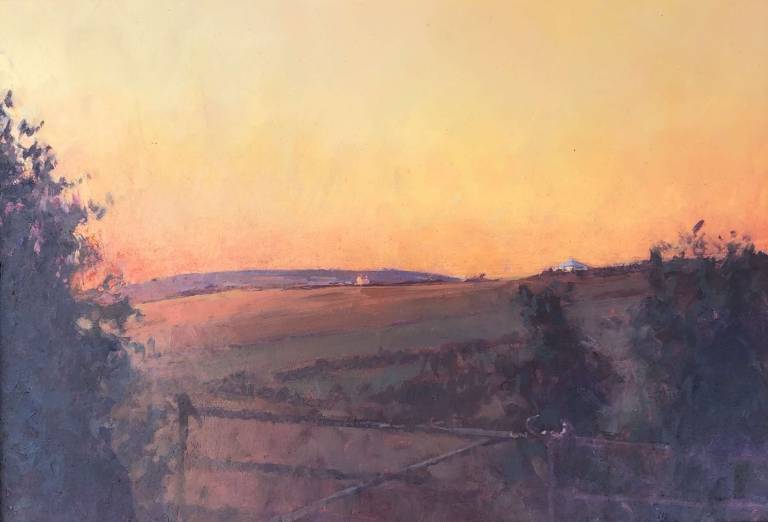 Tom Rickman was born in the City of London 1960
I grew up in the suburbs of West London though spent my childhood holidays in Charmouth West Dorset where from an early age I soaked up the green hills and blue sea.
Finishing Art School in 1982 I left London and headed for the hills to paint the Landscape and sea that had made such an impression on me as a youth.
I worked from a beach hut at Charmouth painting the changing light of Lyme Bay.
The nature of the place was very atmospheric, the deep grey blue Lias of the Cliffs, soft clay, the bay stretching out to the horizon, the edge of the land sucking the last throws of light from the twilight, the sea a shimmering plain. It was a time of opening out and sifting through all that stuff from art school. I think this time formed a lot of ideas that I would keep returning to in later years. The idea of light and colour, which I had excercised in college, being at the centre of my creative work. Now I was out there so to speak amongst it.
As well as painting alot of walking was done, and I always seemed to head west. Along the beach to get around 'that' next headland or climbing to the crown of a hill to see 'that' view again.I seemed to want space and distance. The light and air filling the sky and landscape was my source.
The first time I discovered Cornwall was in 1984 walking the coastpath from Falmouth around to Landsend. I fell for it immediately the constant presence of the sea and the opulent light of the peninsula. I finally moved to west Cornwall in 1992.
The clarity and freshness of the light sometimes astounds me, there are always new moments to experience.
It is a place that reinvents itself constantly to oneself.