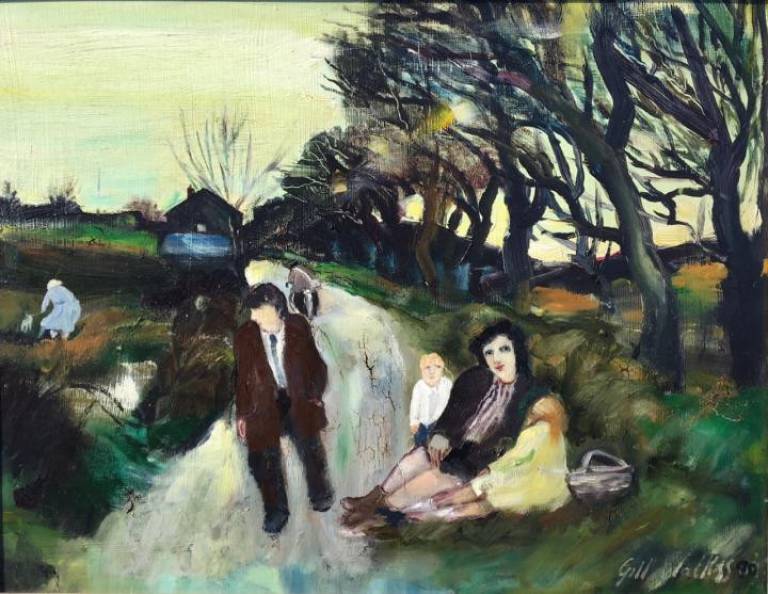 Gill Watkiss studied at the Walthamstow School of Art before coming to live in Newlyn, Cornwall in 1959. A decade later, in 1969, she moved to a house at Cape Cornwall, St. Just and says that this move was a major turning point in her career. Up until then she describes her life as having been an artistic desert but on her arrival in St. Just she would walk to the playing fields and begin to paint.

She continued to paint St. Just and its inhabitants for the next eight years. It was at this moment in her career that people first began to sit up and take notice of her work. Before the move to Cornwall she had been focusing on still lives in London and her work had received little interest. The paintings during her time in St. Just were stimulated by its wind-blown streets and cottages and the vitality and life of its community. It is still a dominating force in her approach to painting West Penwith today.

Gill Watkiss has exhibited her work widely, though West Cornwall is her natural territory. Whether she paints bridal processions across Cornish town centres in stormy weather or family outings to Cape Cornwall, Porthleven or some other instantly recognisable locality, Gill Watkiss captures the atmosphere, the people and the drama of daily life in the Atlantic west of Britain. Her work can be found in private collections throughout Britain, Europe and in many far flung corners of the world.

The figures in Gill’s paintings are seen as being humorous characters to some viewers though others see a more macabre and haunting side. Either way, Gill Watkiss’ paintings are instantly recognisable and very sought after.